ARM’s 2019 dairy investigations have spurred OrganicEye, an organic industry watchdog, to conduct an independent investigation and file a formal complaint against the country’s largest producer of ‘certified’ organic milk, Natural Prairie Dairy. (See below for the press releases and articles).

OrganicEye’s investigation also shines the light on the presence of corruption and how large-scale farming controls, partners, and colludes with governmental organizations to protect the dairy industry and its producers.

This ‘protection’ has ensured that countless consumer, community, and environmental parties’ pleas are ignored.

One of the most public displays of protest involves the Indiana Hoosier Environmental Council charging Natural Prairie Dairy with illegally filling in ditches and wetlands in the state’s most fragile ecosystem. All to construct its new factory farm dairy facility that will house 4350 cows.

For 16 years, OrganicEye has been reporting abuse, violations, and scandals to the USDA and official governing bodies. Still, nothing significant has been enacted regarding accountability within the dairy industry. An appalling reaction that ARM experienced after exposing four dairy farms during what is now considered to be the largest investigation into the dairy industry that has ever been executed.

In OrganicEye’s formal complaint, they requested that the USDA re-open their investigation into the animal abuse that ARM documented whilst undercover at Natural Prairie Diary.

It was revealed through OrganicEye’s extensive research, that no qualified USDA investigators with organic livestock management experience even investigated the violations that ARM exposed at all. Instead, OrganicEye found that the USDA has been using corporate agribusiness front groups and certifiers sanctioned for serious corruption/violations to do the dirty work, which included ARM’s investigation at Natural Prairie Dairy. This has resulted in greenwashing, lack of enforcement, and collusion between industry lobbyists and USDA appointees.

Lending heavily to scandals and cover-ups, this is not the first time that OrganicEye has found the USDA to ignore concrete evidence like ARM’s investigation. OrganicEye has reported decades of satellite images, aerial photography and tips of organic dairy operations in question, they stated that federal USDA investigators never interview the lead witnesses (including ARM) or take serious actions with the incriminating evidence. When they do, they generally co-ordinate with unqualified staff who observe the operations and tip off the dairy operation. This allows the dairies ample time is provided to cover up any violations or discrepancies.

In 2017 OrganicEye also collaborated with an investigative reporter from the Washington Post, in which the USDA preemptively closed an investigation on Aurora, a mega organic dairy farm. Despite the Washington Post investigative reporters’ evidence, including damning drone video footage documenting violations of strict organic standards regarding the grazing of dairy cows, the USDA ignored and defended the dairy. After reviewing uncertain pasture management records, the USDA filed that the dairy farm was in compliance and met organic standards’ requirements. The case was closed without any further investigation.

The Cornucopia Institute also confirmed that the USDA is complacent and lacks proper enforcement  of organic standards and has done so for years.

This corruption is something that ARM has encountered time and time again when presenting concrete animal cruelty cases to the USDA, including that of Natural Prairie Dairy. To date, no-one to this day has been held accountable for the crimes that were documented legally during ARM’s in-depth investigations. The USDA has also ignored complaint letters sent directly to the USDA and have never contacted ARM, being the primary witness to the crimes at Natural Prairie Dairy.

It is evident, now more than ever, More than ever, that Big Ag is controlling and dictating what the USDA and other government agencies do, showing the food safety and inspection system in the United States is corrupt and broken.

In addition, consumers are also continuing to be deceived by companies and products when they are trying to make conscious decisions in supporting higher standards for animals, the environment, and themselves.

“Consumers who are willing to pay a premium for organic dairy products assume they are supporting more humane animal husbandry standards and exemplary environmental stewardship as required by law, and that part of the extra cost goes to support family-scale farmers who share their values,”

– Mark A. Kastel, Director of OrganicEye 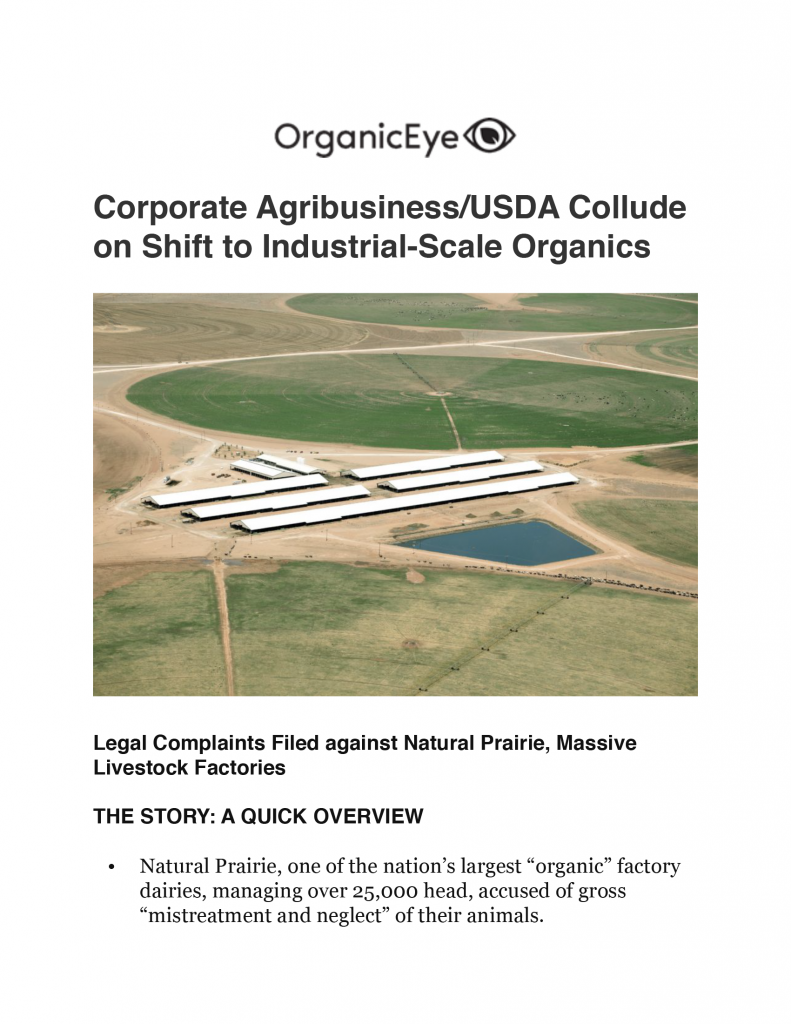 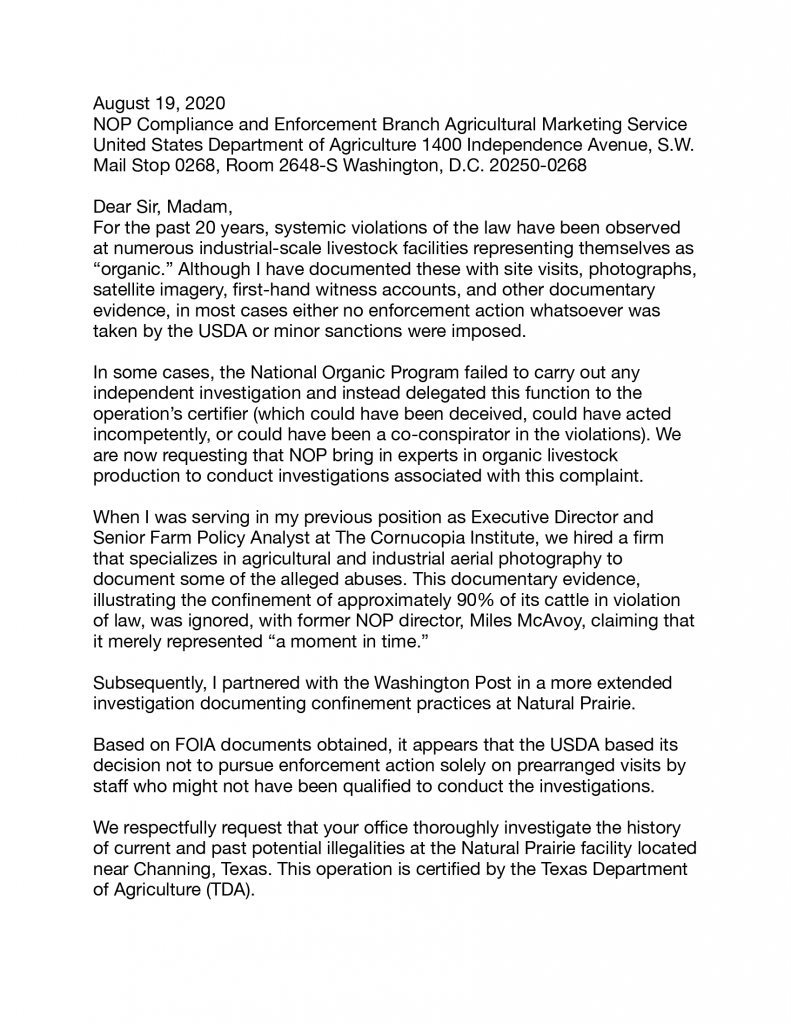 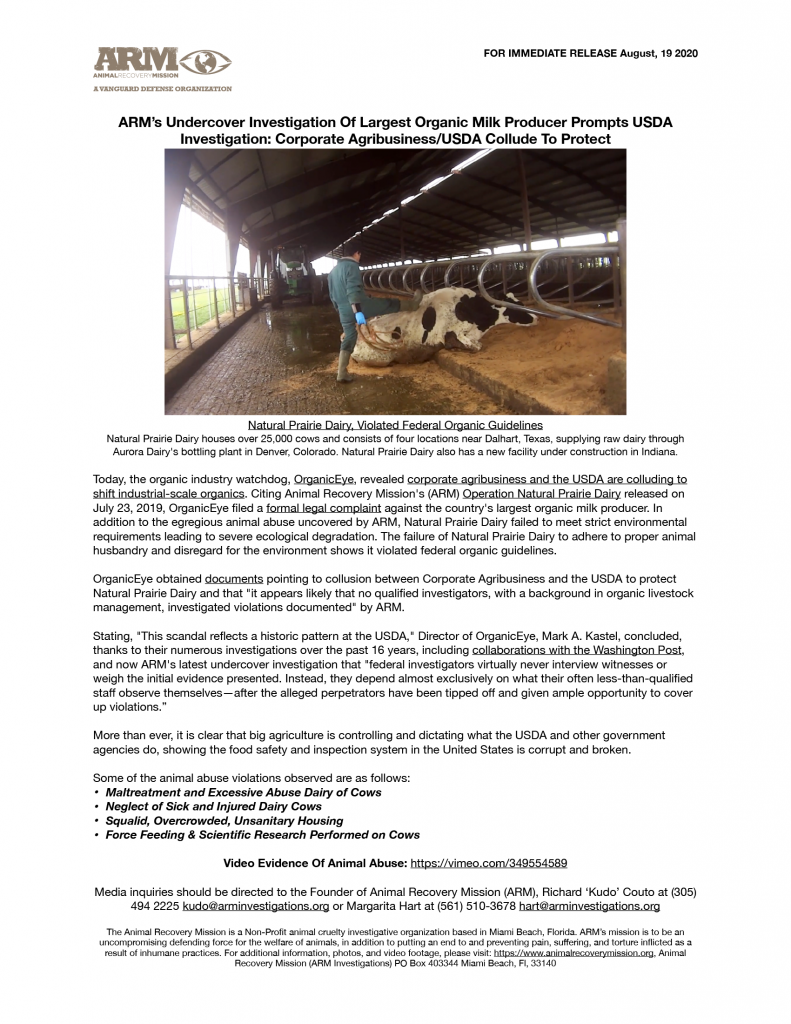